It is a Union, structured as an incorporated society established for the purpose of collective bargaining for work undertaken in state and state-integrated schools by principals in: (a) Primary schools (including normal schools, model schools and intermediate schools); (b) Composite schools other than area schools; (c) Special schools.

How does PPCB work?

The PPCB negotiating team will be negotiating on your behalf in the collective bargaining process.

Why would I join PPCB?

Principals need their own representatives at the bargaining table. In this way, principals are working for principals and so the needs and aspirations of principals are to the fore. You can expect the PPCB bargaining team to work for better terms and conditions in your Collective Agreement.

What is the relationship between PPCB and NZEI?

PPCB and NZEI will both be representing principals in the collective bargaining process. PPCB aims to work constructively with NZEI to present a single strong claim.

Will PPBC be a separate entity to NZPF?

Yes, PPCB is a separate entity from NZPF. However, NZPF and PPCB have a close relationship. As PPCB serves principals, the PPCB Constitution requires that members belong to NZPF to join. In addition, 3 of the 5 members of PPCB’s Executive Committee are required to be members of the Executive Committee of NZPF. This enables NZPF to have a voice in the work of PPCB and be closely aligned in working together to join professional advocacy to industrial in the best interests of principals.

What if I am a memeber of NZPF and don't wish to belong to PPCB?

PPCB is a separate entity to NZPF. You do not have to belong to any Union but if you choose, you are free to belong to the Union of your choice or both Unions.

Will PPCB formally represent me in the collective bargaining process?

Yes, you can belong to PPCB as a member from the date you join. If you are a member of PPCB only or if you are a dual member of NZEI and PPCB and nominate PPCB to be your bargaining agent, you will be represented by PPCB in Collective Bargaining.

How does collective bargaining work with two unions?

The Ministry of Education’s approach to the joint bargaining of PPTA and SPANZ is the expectation of a single Collective Agreement outcome.

Ratification between the membership of both Unions occurs through a memorandum of understanding-PPTA and SPANZ agrees to seek ratification of the agreed outcome of bargaining from their respective members. Both Union’s votes are tabulated and counted to establish an outcome across the whole principal community irrespective of which Union they belong to.

Can I join PPCB if I am an area school or independent school principal?

PPCB works on behalf of those principals in the Primary Principals’ Collective Agreement to negotiate pay and working conditions. Unfortunately, this does not currently extend to other agreements. It is anticipated that other Collectives will be considered once PPCB is established.

How is PPCB funded?

This will be invoiced upon joining up.

PPCB is not funded by the Ministry of Education.

As PPCB is established, its initial operating costs will be underwritten by a loan from NZPF. This is required to be repaid by PPCB within a two-year period.

Will PPCB be financially viable?

Yes, PPCB has been modelled on a comprehensive analysis of the SPANZ operating costs. Accurate modelling, planning, and contingency are provided to ensure PPCB is robust.

Will PPCB represent me if I have a problem with my board?

PPCB’s purpose is Collective Bargaining. Employment relationship problems require specific legal advice. If principals want access to high-level expertise regarding their employment status in the workplace, then belonging to the Principals’ Advice and Support Scheme Limited (PASL) is recommended. The PPCB fee is set at a very low rate to reflect the crisp focus on Collective Bargaining. However, subscribing to both PASL and PPCB gives you strong representation and legal protection.

Does PPBC have principal support officers?

No, PPCB is focused on Collective Bargaining. PASL provides an excellent hotline service and on-the-ground employment support should it be required. NZSTA offers advice to principals in their role as the employer’s designate.

What will PPCB offer me?

We are stronger when we work together – collaboration is the way of the future.
Being represented by a Union focused on principals, you can be sure that principals’ perspectives will be canvassed, shared, and represented at the collective bargaining table.

What will it cost me to join PPCB?

Who can pay my PPCB fee?

The law requires that a Union fee is paid by the member, not the member’s employer.

Can payments be made in instalments?

A single payment upon invoice is required with 2 months from 1 February to make payment.

Do I have to belong to PASL?

Currently, 50% of all principals belong to PASL. Membership in PASL is recommended but not compulsory.

What will happen to my current collective contract if I join PPCB?

Will PPCB assist me in understanding my employment agreement including entitlements and obligations?

PPCB will be able to advise you about the terms and conditions of your Collective Agreement including obligations to your employer and entitlements.

Will PPCB seek my views on the terms and conditions of my collective agreement prior to negotiating a collective employment agreement?

Yes, PPCB will undertake to survey PPCB members on the terms and conditions of the Collective agreement. This data will be used in negotiating the Collective Agreement.

Will PPCB seek my views on any reasonable offer put forward by the ministry of education to settle the primary principals' collective agreement?

The bargaining team appointed by PPCB will take any reasonable offer from the Ministry of Education back to the membership for ratification. 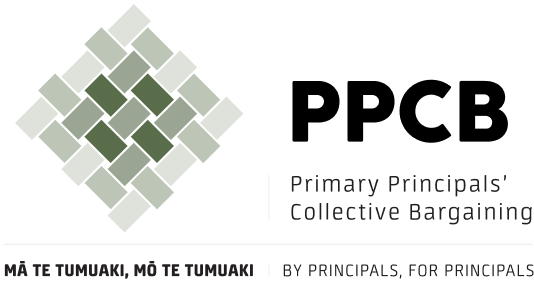